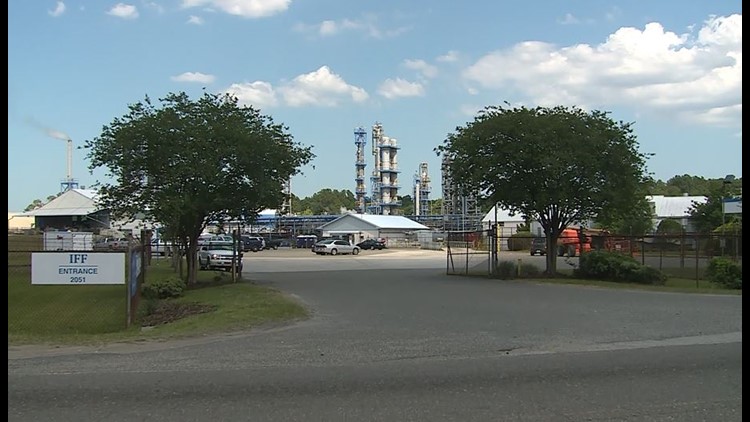 IFF Chemical Holdings was cited this month after the city verified odor complaints at 16 homes in just over two weeks.

JACKSONVILLE, Fla — *The above video was originally published in June 2021

A Jacksonville fragrance factory accused for years of emitting a ‘vile,’ chemical-like odor was issued a cease-and-desist order by the city for the second time in 10 months.

IFF Chemical Holdings was cited this month after the city verified odor complaints at 16 homes in just over two weeks from Sept. 23 to Oct 9. The citation states the International Flavors and Fragrances facility on Lane Avenue was verified as the source of the odor.

“IFF is in receipt of the letter from the City of Jacksonville related to odor complaints. IFF takes seriously any complaints from community members and investigates its plant operations in response to each claim of odor communicated to IFF. We are committed to using best-in-class practices to prevent any odor that may come from the Jacksonville facility.  IFF uses a series of odor monitoring and mitigation processes to prevent odor, in compliance with all laws and permits. We will fully cooperate with the City of Jacksonville to address the issues contained in the letter and we understand there are other manufacturing facilities in the area which may be the source of the objectionable odor.”

The company was also being sued by three Murray Hill residents who claimed the odor was destroying their way of life. They were seeking to start a federal class-action lawsuit, but a federal judge dismissed it in July, stating it needed to be done on the state level, not federal level. Their attorney is still pursuing her plaintiffs’ claims.

Last month the city hired an Australia-based environmental intelligence software company to install 11 devices in affected areas. The devices are sensitive to hydrogen sulfide, ammonia, and volatile organic compounds and are part of their year-long study to track down the source of the odor.