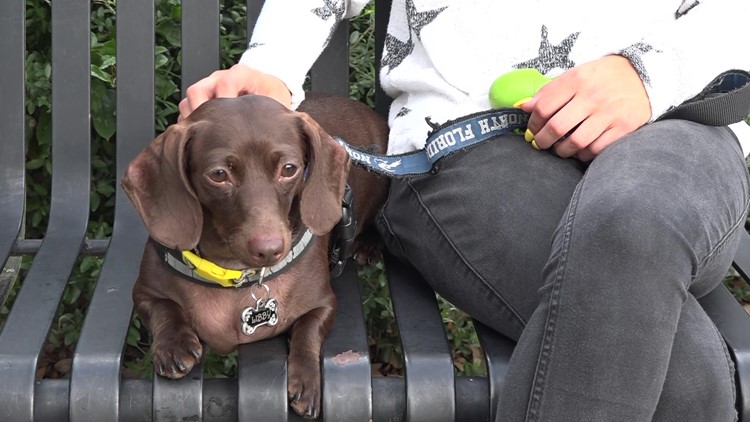 Leah Guertin has lived on the UNF campus with Libby for two years and says she has never had any problems until Friday.

JACKSONVILLE, Fla. — A University of North Florida student who relies on a certified emotional support animal is now afraid to take her dog around campus.

According to a university police report, junior Leah Guertin and Libby, her mini-dachshund, were both sprayed with some sort of chemical irritant by another woman while in a bathroom on campus last week.

“She became my certified emotional support animal in July of 2019,” Guertin said. “She’s there for me with my anxiety, my depression and my PTSD. And I’ve seen tremendous growth in myself since having her.”

Guertin has lived on the UNF campus with Libby for two years and says she has never had any problems until Friday.

She says they went to a bathroom Libby was familiar with, and she ran ahead of Guertin toward the back stall. A woman in the stall started screaming and Libby barked back at her in response, according to Guertin.

Guertin says she quickly assured her that she was a friendly, emotional support animal. However, after she picked Libby up and went into her own stall, Guertin says, she felt either mace or pepper spray fall into her eyes and started coughing along with the other women in the bathroom.

She realized Libby wasn’t okay either.

“She was like spasming as if she was having a seizure. I was freaking out thinking that she was gonna go blind, because she could not get her eyes open,” Guertin explained. “I told my mom at one point, ‘I don’t know what I’m going to do if my ESA goes blind.’”

According to the report, the responding officer helped Guertin rinse her “red, irritated eyes.” Then her friend took them to the vet, where they flushed out Libby’s eyes.

Guertin is still shaken up and says she hasn’t brought Libby around campus since the incident.

“She’s still my ESA. I should be able to take her on campus and know that she’s going to be safe,” she said.

Police aren’t pursing an investigation into the battery due to a lack of suspect information, but Guertin encourages people to learn more about the role of emotional support animals who will be around in the community.