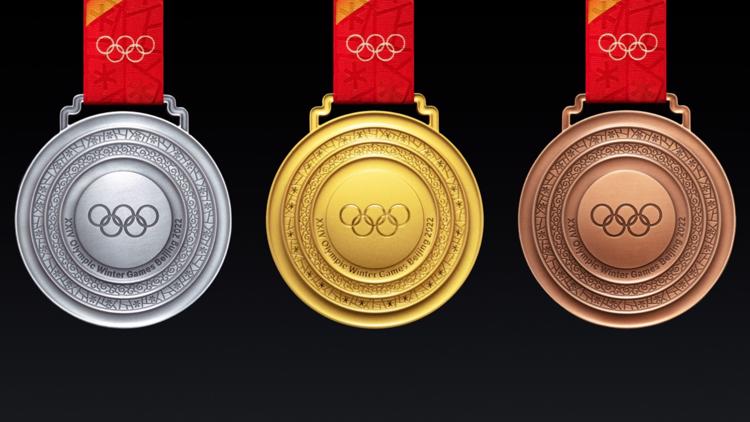 Organizers say the designs, modeled after ancient jade pendants, symbolize how the Olympic games bring people together all around the world.

BEIJING, China — Just over 100 days out from the Beijing Winter Olympics, fans are getting a first peek at the new medal designs.

The Beijing Organising Committee unveiled the “Tong Xin” — meaning “together as one” — designs Tuesday. The iconic Olympic symbol sits in the center, surrounded by the words “XXIV Olympic Winter Games Beijing 2022,” concentric rings and stylized clouds, ice and snow.

The backs of the new designs also feature concentric rings, along with the name of the event each medal is for. The emblem for the 2022 Olympics is in the center of the back, along with the full Chinese name for the event.

🎉With exactly 1️⃣0️⃣ 0️⃣days to go before the start of the Beijing 2022 Olympic Winter Games, the design of the medals that will be awarded at the Games has been unveiled! 🏅️🥈🥉#beijing2022 #medal #Olympics pic.twitter.com/c5Zi9gZETe

The committee said the new medals are “based on Chinese ancient jade concentric circle pendants.” The five concentric rings circling around the Olympic emblem represent “the Olympic spirit to bring people together and the splendour of the Olympic Winter Games being shared all over the world.”

Beijing is the first city to host both a Summer and a Winter Olympics. Organizers say this year’s medals resemble those for the 2008 Beijing Summer Games.

While the Winter Games are months away, there has already been no small share of controversy. Activists protested human rights abuses in China at the flame lighting ceremony earlier this month. The lighting ceremony for the 2008 Beijing Summer Games saw its own pro-democracy protests.