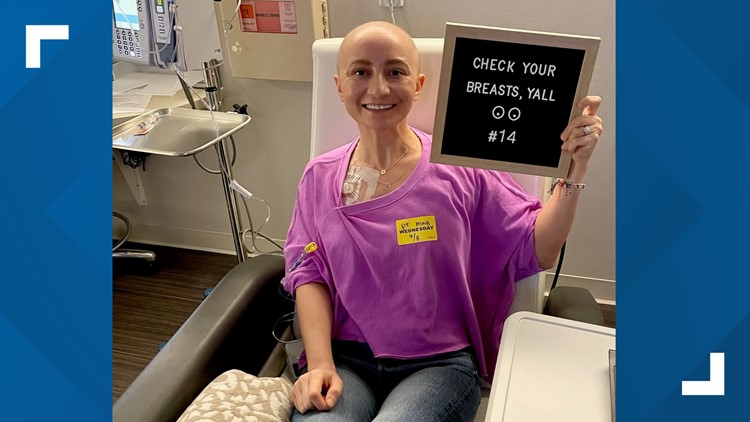 Shannah Montgomery was just 33 when she was diagnosed with Stage 3 breast cancer. She thought the lump she found was just a cyst.

JACKSONVILLE, Fla — It was about seven months after Shannah Montgomery found a lump in her breast, that she got it checked out.

“I just convinced myself, I just thought there’s no way that can be cancer, I’m healthy, I’m young,” Montgomery said.

She thought it was just a cyst, but months later another lump appeared. She said it felt hard like a marble.

“So I had two tumors at that point. That was the one that got me nervous,” Montgomery recalled.

Her doctor ordered a mammogram, which led to an ultrasound and then a breast biopsy.

“She basically told me, what she was seeing was cancer.”

This past April, at the age of 33, Montgomery  was diagnosed with Stage 3 invasive ductal carcinoma. It’s the most common type of breast cancer.

“You just think about your life, and especially being younger, you know, I have a full-time job. I’m in my career, and it’s like the best time of my life being in my 30s,” Montgomery said. “This coming in just kind of puts a halt on your life.”

Dr. Saranya Chumsri, Montgomery’s oncologist at Mayo Clinic in Jacksonville, says one out of eight women will develop breast cancer at some point in their lifetime. The risk is less than 1% when you are in your 30s.

“The key is that any change in the breasts, you know, especially if there’s some lump that is increasing in size, that’s something that’s very important for you to talk to your care team, your primary care your physician, and get that checked out,” Dr. Chumsri said.

After completing 16 rounds of chemo and three cycles of immunotherapy
Montgomery rang the bell in September.

This month she had a double mastectomy and may then have to have radiation followed by reconstructive surgery.

“Don’t be like me, and don’t convince yourself that it’s not cancer, because it can happen to anyone, and it happened to me,” Montgomery said. “Even though it is a scary process, and it’s scary to think about that, early detection, it truly does save lives.”

She’s now looking forward to taking a big vacation with her husband once she gets through her treatment. And she’s eager to give back and help other women who get diagnosed, grateful for all the support she’s received.

“How I like to look at it is this is just going be like one year of my life. I still have so many more years ahead of me, so I can get through this one year and the rest still just live my life.”

Dr. Chumsri says with early-stage breast cancer you often have no symptoms, but as it grows you may feel a painless, hard lump, and you may notice changes in your skin like dimpling or nipple inversion.

Talk to your doctor about when you should start getting annual mammograms and do regular self-breast exams.