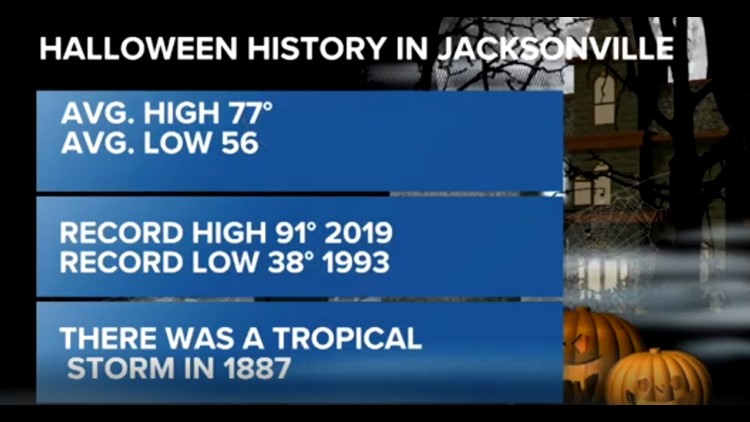 JACKSONVILLE, Fla. — Unlike other areas of the USA that need to worry about snowfall on October 31, Jacksonville has never seen the white stuff on Halloween. This does not mean it never gets cold though.

In fact, the coldest Halloween on record was in 1993 in the city with a low of 38 degrees. The warmest on record was in 2019 when the mercury hit 93, this was quickly followed by a potent cold front that forced the temperatures to drop into the evening on that date. Some areas saw a nearly 50-degree drop in 24 hours.

These temperature swings are not uncommon in late October as we are in the middle of Autumn on the First Coast. Yet with the Tropical season still in place until the end of November, there is always that lingering threat of a storm.

This happened in 1887 when a tropical storm passed south of Jacksonville before moving off the coast and causing at least four shipwrecks along the coast from Florida to the Carolina’s.  This was known as the “1887 Halloween Hurricane”.

With all these swings in temperatures and rainfall threats, it of course is important to check the latest forecast to help you and your family prepare for Halloween. The latest updates can be found here.