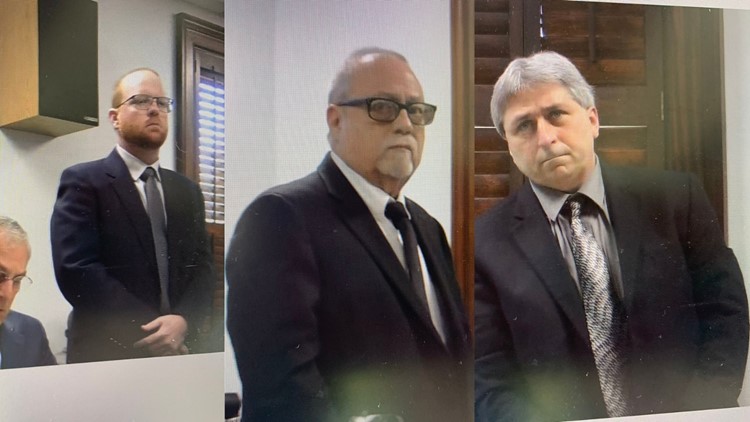 Jury selection for the three men accused of murder in the death of Ahmaud Arbery continues Thursday.

RELATED: ‘I can’t be an impartial juror, no way’ | Who’s being selected, who’s not to serve on jury in death of Ahmaud Arbery trial

11:04 a.m.: The Justice Coalition cheers on Arbery’s father, Marcus Arbery Sr., as he walks into the courthouse.

Defense asks if any potential jurors recognize any of the defendants and has the three men stand up. Several say they have negative opinions about the three defendants pic.twitter.com/mdIoHyW6y4

10:05 a.m.: Members of the Transformative Justice Coalition arrive at the courthouse for day four in support of Ahmaud Arbery. “We can’t take it no more!” they chant.

8:57 a.m.: Judge Walmsley and the attorneys in the case are in the courtroom for a hearing on a motion by WXIA-TV of Atlanta, WMAZ-TV of Macon and WJXX/WTLV-TV of Jacksonville (First Coast News), opposing the judge’s partial gag order on the attorneys in the case. The order prohibits attorneys from discussing evidence Walmsley has already ruled cannot be admitted in the trial, such as Arbery’s mental health records. The judge did not rule in court. He said he will issue a written order later.

RELATED: Watch Live: 15 jurors pass to next round of questioning, including some who say they know major players in the death of Ahmaud Arbery trial

There have been 37 total jurors dismissed over the three days of jury selection.

2:13 p.m.: Several potential jurors are being struck because they have already formed an opinion about the case and tell the judge they cannot be impartial. Juror 170 says he has a negative opinion about Bryan, and is likely to be excused because he is over 70 years old and does not want to serve.

#170: Negative opinion about William Roddie Bryan. Probably will be excused because he meets statutory guideline for removal (over 70 and does not want to served)