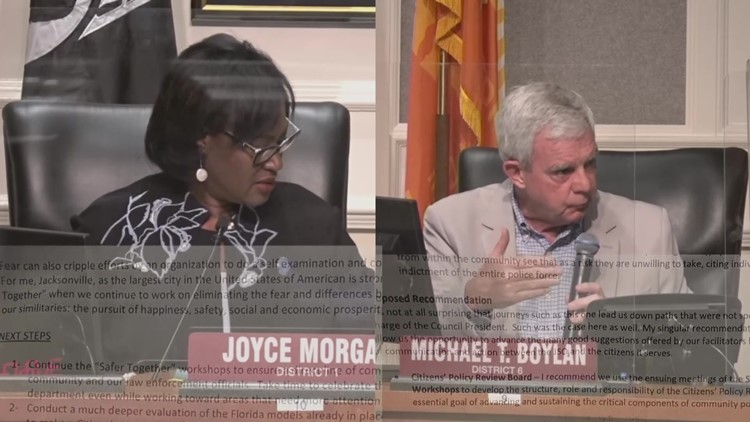 Councilman Boylan cited mistrust between the Jacksonville Sheriff’s Office and the community as one of the reasons for resigning.

Boylan served as the committee’s vice-chair prior to his request. Boylan joined the committee when it was first created at the request of then-Council President Tommy Hazouri.

He cited the Oct. 15 meeting as the reason why he wants to resign. In his letter to Council President Newby, he says that for the committee to work, there needs to be “some level of trust” between the Jacksonville Sheriff’s Office and the community.

“Speaking frankly, I fear that many of those from within the community see that as a risk they are unwilling to take, citing individual incidents as an indictment of the entire police force,” Boylan says in his letter.

Boylan also reaffirmed his stance against an all-citizen incident review board. However, he says he now no longer supports a civilian policy review board.

You can read Councilman Boylan’s full statement below:

With this letter I am requesting to be released as the Vice-Chair of the Safer Together Committee. I agreed to serve at the request of CP Hazouri (and continue under your presidency) with the hope of providing a forum towards the creation of a process for improving the relationship between the JSO and the community it serves at a time when there was much discord across the country.

The first series of workshops proved to be a great opportunity for learning from each other…for the community to see the many and varied ways the JSO seeks to engage citizens and for the JSO to garner a greater appreciation of how they are perceived in certain areas of our city. In my view those heartfelt discussions demonstrated to me that the instrument which I recommended at the end of the first set of workshops, a civilian policy review board, would be a way to continue building mutual respect and understanding.

In that recommendation memo I noted the following:

If we truly are looking to find common ground between the JSO and the community it serves there needs to be some level of trust on the part of all stakeholders. Speaking frankly, I fear that many of those from within the community see that as a risk they are unwilling to take, citing individual incidents as an indictment of the entire police force.

It became more than evident to me at our meeting on Friday (10/15/2021) that most of the citizens actively participating in these discussions are either unwilling or unable to demonstrate such trust. While I understand their passion, I cannot be party to an effort where individuals use the forum to make disparaging assertions and unwarranted accusations towards fellow citizens who have chosen to protect and serve them, particularly when Director Bruno and others from the JSO have conducted themselves professionally throughout.

To say that I am disappointed is an understatement. I had hoped better for all of us.

Ben Frazier and the Northside Coalition of Jacksonville released the following statement in response to Boylan’s request to resign:

“We need council members who are ready to do the uncomfortable but courageous work of police reform.  We are hopeful that someone on the council will have the integrity to stand with CM Joyce Morgan in her effort to bring this city together. This resignation represents the classic nature of the problem that confronts us: extreme distrust between law enforcement and the black community.”