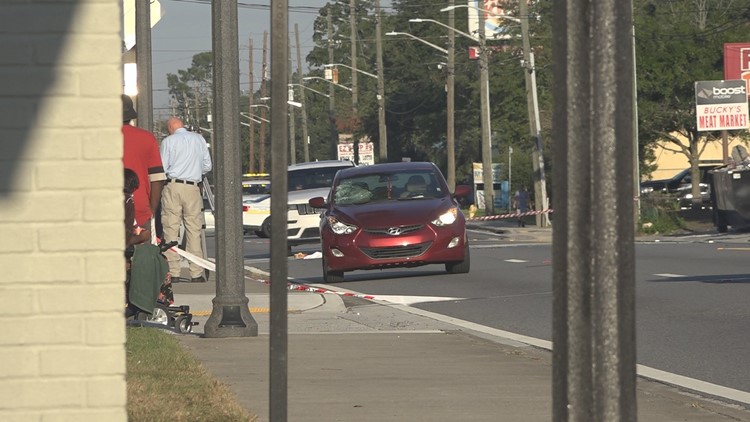 The crash happened on the same block as a senior community living center. One resident says he is scared to cross the road.

Officers say the driver of a red sedan hit and killed an elderly woman on the intersection of Kings Road and Spire Avenue. The car has visible damage to the front windshield.

The woman died at the scene.

This happened on the same block as Edward Waters University and a senior community living center. JSO Lt. Nissam Mana says the driver is cooperating with officers and they are working to identify the woman who was killed.

This is the 45th person to be hit and killed by car in Jacksonville in 2021 alone, according to Mana. This makes 174 traffic fatalities in Duval this year as well.

Dr. Nathaniel Carter, a resident of that senior living center, says he is afraid to cross the street.

The busy road was blocked off during rush hour. People waiting for the bus stared in shock.

This is the 45th pedestrian hit and killed by a car in 2021 in Jacksonville, according to @JSOPIO. I spoke with an elderly man who lives at the senior center on the same block where this happened. He says he does not feel safe crossing the road here. @FCN2go pic.twitter.com/9Y9fB5Dfxo

“My advice to any and all, especially the seniors who live here, be very cautious crossing Kings Road,” Carter warned. “Because these people fly by here and they’re not really watching pedestrians.”

Lt. Mana says the driver has not been charged and depending on what they find, there is a chance there will be no charges. They are investigating the circumstances.

Police have since cleared the scene, uut Carter hopes to see more law-enforcement on Kings Road to hopefully slow people down and prevent another tragedy.