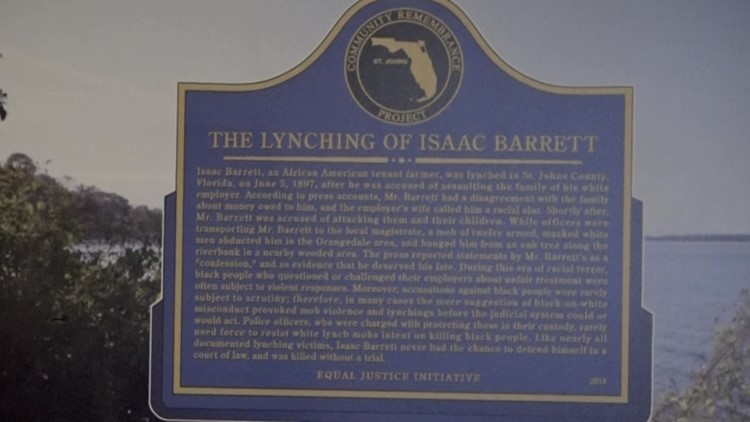 Back in 2019, city commissioners unanimously approved the concept that the Isaac Barrett marker be placed in the Plaza De La Constitución.

ST. JOHNS COUNTY, Fla. — There are dozens of monuments and markers scattered around the Plaza De La Constitución in St. Augustine, which help tell the history of the nation’s oldest city.

Lincolnville Museum and Cultural Center Executive Director Regina Gayle Phillips has been eager for another marker to be added to the collection. Specifically, a marker to remember Isaac Barrett, the only documented lynching victim in St. Johns County.

“That marker has been sitting in my closet here at this museum for over a year. It’s here, it has been here. We were just waiting for a date,” Phillips said.

A marker once stood near the Shands Bridge, where the lynching happened in 1897, but it was stolen in 2018 — less than 36 hours after it was put in place.

Isaac Barrett was a tenant farmer accused of severely beating the man he worked for and the man’s family. He was captured and killed by a mob before he could get a hearing before a judge.

According to the Equal Justice Initiative, Barrett’s is one of 318 reported lynchings in Florida. There could be more that weren’t reported. The organization opened a museum in 2018. It’s a memorial to the more than 4,440 people who were lynched in the United States from 1877 to 1950.

Phillips says the EJI donated a second marker to replace the first one. One effort of the EJI, a nonprofit that focuses on fighting injustice and mass incarceration, is to have markers placed at lynching sites around the country.

Before it was made, Phillips went to the City of St. Augustine to request the new marker be placed in the Plaza De La Constitución.

“All the tours come through there. What a wonderful place to educate people about some of the racial injustices in our community that we’re trying to overcome, because the point of this marker is reconciliation,” Phillips explained. “It may be a part of our legacy that we don’t like, but it’s not to embarrass us. It’s to make us stronger, because that’s the only thing that’s going to help us to overcome some of the racial differences that we have.”

She also thought it would be safer in the more public space.

In August 2019, the city commissioners unanimously approved the concept.

A lot happened after the vote: the COVID-19 pandemic and the Social Justice Movement, which led to revisiting the relocation of Confederate monuments. Ultimately, the plans for the Isaac Barrett marker were put on hold.

“The city commission has not pressed me to bring the item back, but it is time to reconcile this with the groups that are advocating for it,” St. Augustine City Manager John Regan said.

First Coast News obtained an email chain from March 2020 that shows there was a visual mockup of the replacement marker in the plaza. The City of St. Augustine was also working with activists on the language for a plaque to go with it.

A plan was then supposed to go back to the commission for final approval.

However, Regan is now recommending the city not move forward with the placement of the Isaac Barrett marker in the plaza.

Instead, he believes it’s best placed near the Shands Bridge, where the lynching happened. The plaza is about 25 miles away from the bridge.

“I think that what’s important is that telling the true and accurate history. And by being in the central plaza, it will convey a message that it had happened here,” Regan explained. “I think moving the [Confederate] monument, I learned the importance of the symbolism, of placement means everything, and the Commission has to be very careful how they decide for those things that are put into the central plaza or on any public space.”

In his recommendation letter, Regan also claims, the “act was committed over seventy-five years after the period of relevance identified for monuments to be placed in the plaza, per city code.”

However, James Michael Butler, Kenan Distinguished Professor of History at Flagler College, argues the marker would not take away but add to the narrative of the plaza by bringing in history from the Jim Crow era.

“There is nothing between enslavement and the Civil Rights Movement currently in the plaza. A monument that notates the fact that a lynching happened [in St. Johns County], as well, fills in the gap between that history,” the professor said. “This issue is not just St. Augustine’s issue, this is part of a greater movement to commemorate one of the most difficult times in American history, so that we can learn from it, have dialogue about it and understand why we are at the position that we’re at as a society.”

Phillips says the letter was like a slap in the face.

“Are we angry? Yeah, we’re angry,” she said. “And we’re not getting ready to just, you know, play dead and pretend like this didn’t happen.”

Regan plans to present his recommendation to the city commissioners at its meeting at end of the month before a final vote.

Florida led the nation in per capita lynchings. According to Butler, it was more dangerous for African Americans to live in Florida during the time than to live in Mississippi, Georgia or Alabama.