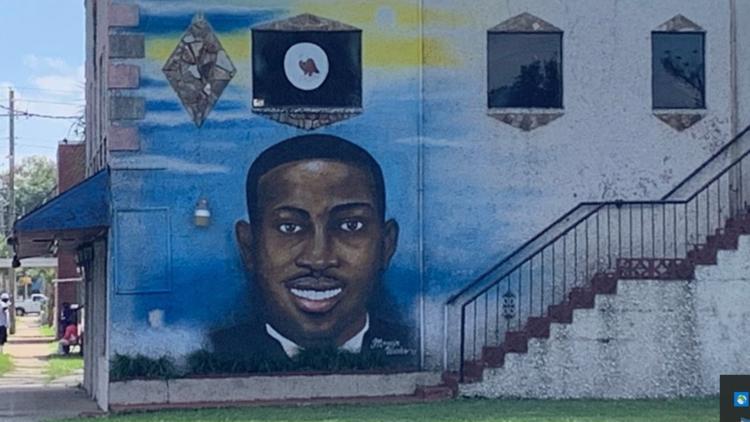 Residents said they don’t think any locals will cause issues during or after the trial, but said people from out of town may.

BRUNSWICK, Ga. — Less than a week before the men charged with Ahmaud Arbery’s death will stand trial, community members in the small town of Brunswick, Georgia said they hope things remain peaceful throughout the trial. They also said, though, they’re ready for anything.

Expectations for the trial for Arbery’s accused killers have been building in Brunswick for more than a year.

“I think the past year and a half has been a very trying time for this community,” resident Jeremy Ekberg said. “I think we all want to see justice done, no matter what that may bring,” he said.

Ekberg said the national attention his town has received was necessary to break the case open.

“It took, unfortunately, all the way to the national level, it took all this attention just for us to get anything done in the case. So, all that media attention was surprising, but in the long run, very welcome,” he said.

“I don’t think anybody wants anything other than that. We are a democracy and our voices are all equal, and I think it’s good to express opinions about something this important for our community and our nation,” he said.

Monday, jury selection starts in the trial for the men charged with killing Ahmaud Arbery. Brunswick residents say they hope things stay peaceful throughout the trial. They don’t think locals will cause problems, but think people from out of town may. More:5, 5:30 + 6 on @FCN2go pic.twitter.com/7EkjWykpNd

Sheila Amick works down the street from the courthouse, where they laid new mulch this week ahead of the trial. She said she’ll work from home during the trial just in case.

“You always hear, you know, ‘they’re busing them in,’” she said. “Well, you know, I mean, hopefully, I do not think that the locals, people that live in Glynn County, I think we have pride in our county and our city. I don’t think the locals would do anything. If anything bad happens, it has to be somebody that’s not from here that doesn’t take pride in this community. Just, you know, here for the trouble,” Amick said.

Amick said everyone she has talked to in the city wants justice served.

“It’s bringing people together, and I think people want justice. They want, you know, a fair trial for everyone,” she said.

“After you watch the video, white, Black, Spanish, you know, whatever nationality, everybody I know, it’s guilty. I mean, it’s just unfortunate, but it’s on tape. You know, it’s hard to kind of say, it didn’t happen,” Amick said.

Travis Riddle, owner of Country Boy Cooking and a mayoral candidate, grew up in Brunswick. He moved to Atlanta, then came back to help organize peaceful protests after Arbery’s death.

“It has been a roller-coaster, been ups and downs. Out there right now, we are on that plateau with a roller-coaster about to approach the cliff to go up, so everybody’s adrenalin again is back bought, getting excited about what’s been happening or what the outcome will be,” Riddle said.

Riddle said he hopes whatever the outcome of the trial is, he hopes his community sticks together and remains peaceful.

“We did our part as a community. We just have to let the law do what they’re going to do from this point on,” Riddle said.

“My biggest thing is just getting out here in the community and talking with the locals to let them know that this is our hometown and we need to make sure we protect our hometown and asking that the people from out of town keep shenanigans out of town and let us deal with it accordingly in our hometown,” he said.

Riddle said he has heard some businesses plan to change their hours or close during the trial as a precaution.

He said he hopes months and years after the trial, the residents of Brunswick will continue to stand united.

“I would hate with something of this magnitude to happen to only bring us together for a short period of time, that we as a community can continue to be connected and work together on bigger projects and move to a better future in the city,” Riddle said.