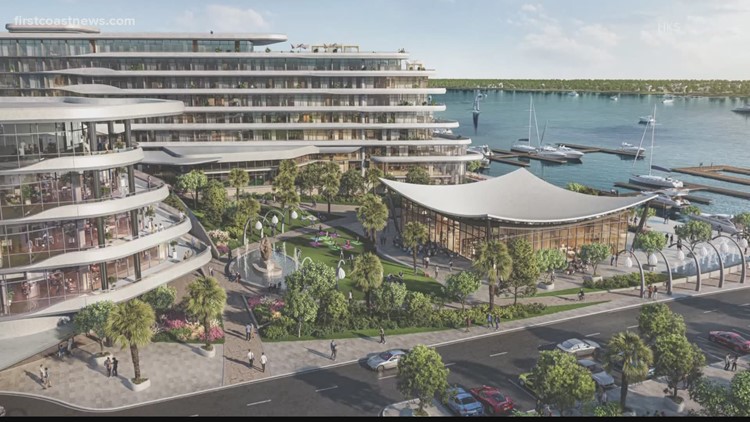 Shad Khan’s Iguana Investments will be responsible for redeveloping about 10-acres of property, along the Northbank in Downtown Jacksonville.

JACKSONVILLE, Fla. — The Jacksonville City Council unanimously approved a bill that clears the way for Shad Khan’s development of the Shipyards Project.

The project includes the construction of a Four Seasons Hotel, condominiums, and a six-story building with office space. A plan to build practice facilities for the Jacksonville Jaguars has already been approved.

Khan’s Iguana Investments Florida LLC. will be responsible for redeveloping about 10-acres of property along the Northbank in Downtown Jacksonville. The city currently owns the property, once a city park called Kids Kampus.

The hotel will have at least 176 rooms, and the luxury condominiums will contain about 25 units, according to the development agreement between the city and Iguana.

According to the bill, private investments into the hotel, condos and office must be at least $301,057.548.00. Meanwhile, the city is responsible for providing $114 million of donated land, reconstructing the marina at the site, relocating small city-owned buildings and providing cash incentives to Iguana Investments. The incentives include a $25.8 million completion grant.

The buildings set to be relocated are the fire museum, fire station and fire dock.

The city will also rebate 75 percent of property taxes from the value of the new development over two decades, worth nearly $50 million.

The city will also spend up to $17.2 million on improving the Metropolitan Park Marina. This includes a support building and riverwalk improvements.

Construction at the site should begin no later than June 2022 with the entire project being completed by no later than Dec. 31, 2025.

The Department of Public Works will oversee the development of the hotel, condos and office buildings while the Parks, Recreation and Community Services will oversee marina and riverwalk improvements.