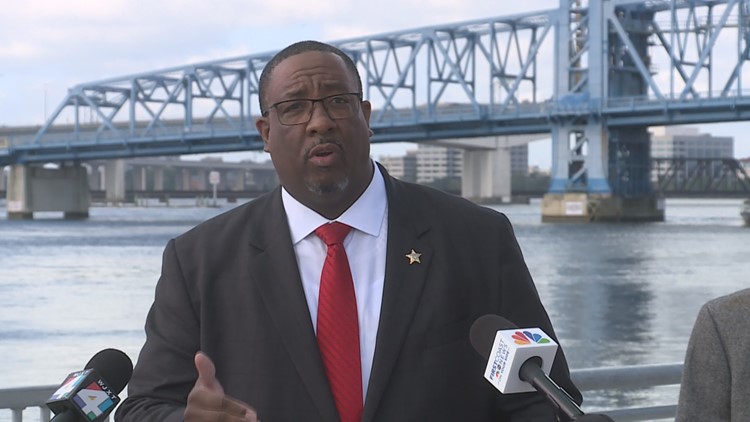 Waters, who has served with JSO for 30 years, is running as a Republican and said this was an important time to get the endorsement of Williams and Rutherford.

The first votes for Jacksonville Sheriff will not be cast until March of 2023, however current Chief of Investigations TK Waters received two important endorsements Tuesday.

Waters, who has served with JSO for 30 years, is running as a Republican and said this was an important time to get the endorsement of two men who previously held the title of sheriff.

“I love Jacksonville, I love my family,” Waters said during a news conference Tuesday morning.

Sheriff Williams said he’s confident in Waters to become the next leader and “take the Jacksonville Sheriff’s Office to the next level.”

To Rutherford, Waters has the experience to earn the role of sheriff.

“He also has the personal integrity,” Rep. Rutherford said.

Waters said he’s always had a desire to run for sheriff, but now he’s ready. He told First Coast News his goal for Jacksonville is to keep the people in the city safe and “build on the things Sheriff Williams and Sheriff Rutherford has delivered on.”

He expressed how service is important to him. He then gave his take on violent crimes in the city. Water said he wants the next generation of people living in Jacksonville to be safe.

“We’ll talk to you and we’ll do things to help you, but if you show us you don’t want to abide by the rules, we are going to do the things that are necessary to stop you and make you do the things you’re supposed to do,” Waters added.

First Coast News reached out the other candidates for comment. Wayne Clark wrote a statement. He wrote in part:

“I prefer the endorsement of the communities of Jacksonville that want bold new leadership at the JSO, a leader willing to listen and collaborate with everyone to make Jacksonville better, and safer as we move into the future.”

Laketha Burton responded with a statement as well. She wrote in part:

“I’m not running to continue what’s been done at JSO for the last 20 years. I’m running on a new style of leadership that will empower citizens who want to partner with law enforcement in making our city safer and more just.”