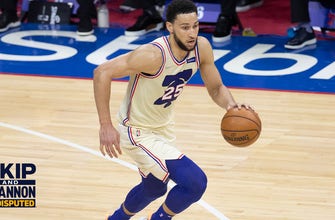 According to a new report, Ben Simmons showed up to the Philadelphia 76ers’ facility last night after staying away for two weeks to start the NBA preseason. The organization was apparently caught off-guard by his arrival, as they hadn’t expected him back until later in the week at the earliest. The disgruntled point guard has already cost himself nearly $1 million in fines and lost salary during his holdout as he wanted to be traded. Skip Bayless discusses whether Simmons will be able to co-exist with Joel Embiid and play for Doc Rivers.