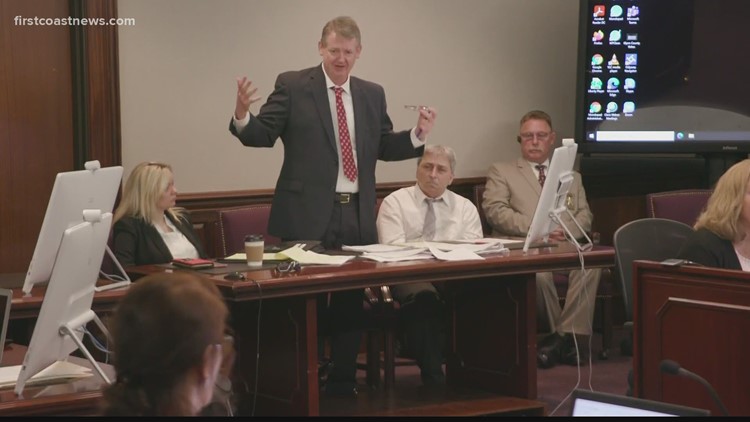 Prosecutors want judge to block defense lawyers from giving interviews or sharing any information with members of the media.

BRUNSWICK, Ga. — Citing concerns about “nightly interviews” and “improper comments” from lawyers for three men accused of murdering Ahmaud Arbery, prosecutors are asking a judge to impose a gag order.

The motion would prohibit lawyers in the case from making any statements about the facts or evidence in the case, as well as anything that occurred or may occur in court. It also seeks to bar them from providing any interviews or written information to the media.

The high-profile case, in which three white men are accused of chasing and killing a black man in a Brunswick, Ga., subdivision, is set to get underway Oct. 18. Greg and Travis McMichael and William “Roddie” Bryan are charged with first degree murder for the Feb 2020 shooting death of Ahmaud Arbery, 25. They have pleaded not guilty.

In the motion, prosecutors say they “regret” asking for the gag order but have “grave concern[s]” that biased comments by defense lawyers will unfairly taint the process and undermine the trial.”

Prosecutors previously attempted to bar media from the courtroom during the questioning of potential jurors. They backed down after a coalition of media outlets collectively objected in a court filing.

In the new motion, prosecutors concede the case has been “in the media” from the very beginning, but say defense attorneys have “substantially contributed to the spread of information to the public, including specific evidence that this court has ruled inadmissible.” Prosecutors say those comments have been “specifically and intentionally slanted in favor of their clients and critical of this court’s rulings and the justice system.”

Prosecutors cite Georgia Bar rules that say attorneys “should avoid unfounded, unsubstantiated, or unjustified public criticism of members of the judiciary. .. or commentary to undermine the public confidence in the administration of justice.”

Prosecutors contend that Travis McMichael’s attorney Jason Sheffield disregarded that rule in a recent interview in which he called the judge’s decision to limit evidence of Arbery’s prior conduct “baffling,” and said of jurors, “Now they will be denied the truth.”

In the motion, prosecutors say, “Publicly criticizing this court’s evidentiary rulings, claiming that such rulings will deny the jury the truth, and advocating for evidence that this court has deemed inadmissible has caused the State grave concern.”

The gag order would “include the release of information concerning the case to any individual or entity, including by not limited to radio, television or newspaper reporters, in any form or medium, including interviews or written statements.”

“[A]s the parties head toward trial,” the motion continues, “the State is concerned that defense counsel will continue to provide nightly interviews and commentary during the trial, about the evidence and rulings, from that day. Such comments, provided to the media on daily basis, may inadvertently be seen by juror, or be unintentionally relayed to juror by another. And such comments that criticize this Court’s evidentiary rulings, and advocate for different ruling in the public forum, will also serve to undermine the public confidence in the administration of justice, as this trial proceeds.”

It concludes, “While the defense may argue that the ‘horse is already out of the barn,’ the party responsible for that is the defense. The State is simply seeking to have these extrajudicial statements to the media stopped now, since if they are allowed to continue, they will have substantial likelihood of materially prejudicing the trial.

Defense attorney have not responded to the motion. No hearing date has been set.