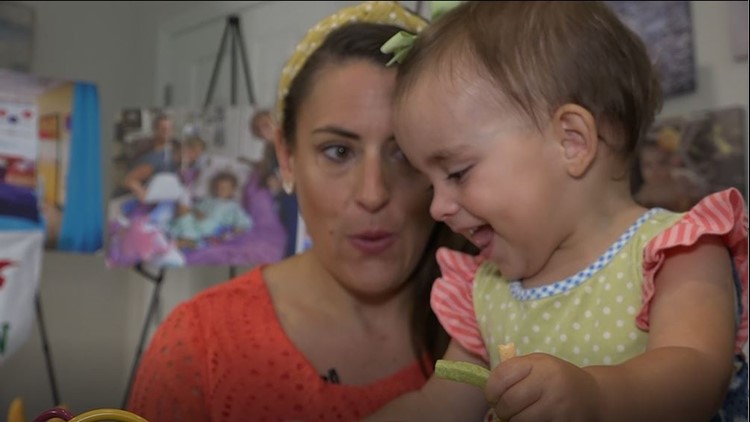 Once Upon A Room Jacksonville turns children’s hospital rooms into their own personalized spaces.

JACKSONVILLE, Fla — Families with children in the hospital are going through one of the hardest times in their lives.

A Jacksonville nonprofit working to grow is making that time a little bit brighter for families. Once Upon A Room Jacksonville turns children’s hospital rooms into their own personalized spaces.

Members of the group surprise families by decorating, or in the time of COVID-19 having hospital staff decorate, with personalized decorations. One mother says she believes it helped her daughter recover faster after surgery.

Brittany Lavender’s daughter Kenna is now a year and a half old but at five weeks old she ended up in the hospital for the first time. She was diagnosed with a birth defect.

“Since then she’s been admitted I believe about six to seven times,” Lavender said.

That’s a lot of time spent in a hospital room.

“She had a coordinated surgery at Wolfson and then she was recovering,” Lavender said. “My husband was also gone at the time and we have two other children so it was a really difficult time for us at the hospital. Kenna, her spirit was dwindling a little bit.”

But then came a surprise that brought Lavender to tears.

“We came back from her surgery and her room was completely made over with this wonderful pink woodland theme,” she explained. “It had her name on it. Even at seven months old, I could see the joy it brought her and I could see just the initiative she was taking to start playing again.”

Once Upon a Room Jacksonville had decorated Kenna’s hospital room, turning it into a personalized space for imagination.

“It just made a huge difference in her recovery,” Lavender said. “It made a huge difference in our family and seeing our little sunshine back. Our only option when we first got admitted was just to sit her in the crib and kind of entertain her that way. But Once Upon A Room stepped in, we were able to move her to the floor on the play mat from the play gyms and have her interact with those toys. I think it also took away some of the boredom, honestly. It can get really lonely and kind of monotonous in the hospital and this gave us just a lot more options and things to do to help her gain her strength back.”

The nonprofit has now brought this to 170 children in Jacksonville in two years.

“It takes anywhere from 15 to 30 minutes to completely transform a room,” said Tina Toomey, cofounder of Once Upon A Room Jacksonville.

Toomey hopes members of the group will be able to go back into the hospital to decorate themselves, instead of dropping off a box of decorations, in 2022.

“Every room is so unique and so different,” Toomey said. “It’s just like every child in the hospital. They’re unique, they’re different, they’re special, and they deserve to feel special.”

Jacksonville was the first city in Florida to establish a chapter of Once Upon A Room, which started with a woman and her daughter in California. Miami also has a chapter.

Lavender believes in the efforts so much that she became the parent ambassador for the nonprofit.

See how you can get involved here.

Really cute video I wanted to include, but didn’t make the cut!

This is Kenna and she and her family know what it’s like to spend days and days in a hospital room.

On #GMJ find out what nonprofit’s simple idea sped up her recovery and how you can help too! @FCN2go pic.twitter.com/4NmwWErquE