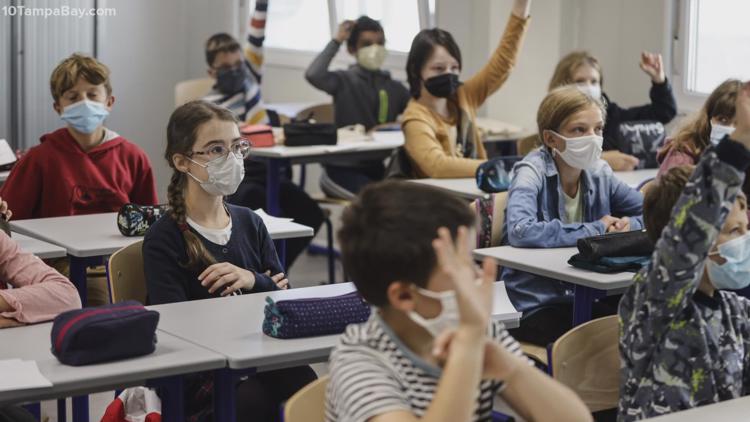 TALLAHASSEE, Fla. — Florida Gov. Ron DeSantis and Agriculture Commissioner Nikki Fried don’t just stand on opposite sides of the spectrum when it comes to their gubernatorial race — they do so on COVID-19 school data, too.

On Thursday, Fried held a press conference to release data on how the virus was impacting kids in schools across the state to allow “for the truth to be known.”

To collect the data, Fried says her team compiled the publicly-available COVID-19 case data from 33 of the state’s 67 school districts.

“And the truth is this. Ron DeSantis is lying to you about masks in schools. We looked at the numbers several different ways and in every single case kids were better off in school districts that required masks than schools that did not,” Fried claimed.

Questions have arisen about Fried’s data drop given the methodology and that hours after the press conference, findings from the data she posted to her Twitter page changed.

Updated data on the Florida Department of Agriculture and Consumer Services website now states “the smallest school districts, without mask requirements, had four times higher student COVID-19 peak cases per capita than in the largest school districts where masks were required,” as opposed to the seven times higher initially quoted.

Fried’s office says that change is a result of another county being added to the data which “impacted the per capita figures.”

“As more information becomes readily available, the Commissioner is committed to making it public,” FDACS added.

Other claims reported by FDACS are as follows:

The governor’s office and the Florida Department of Health critiqued Fried’s data presentation.

“Commissioner Fried is not an epidemiologist or biostatistician, nor does the office of the Agriculture Commissioner have any responsibility or special access to COVID-19 data. It is unclear why she is using state resources to spread misinformation about a subject that is not under her department’s purview,” a spokesperson from Gov. DeSantis’ office told 10 Tampa Bay.

According to the Florida Department of Health, Fried’s presentation did not account for differences seen in communities like demographics, vaccine rates, population, etc.

“Specifically, Highlands County is inherently more rural with a significantly lower population than Miami-Dade and Broward counties – two very populous and metropolitan areas of Florida. Additionally, fewer weeks of data were utilized to calculate cases per capita for Miami-Dade as school years started at different points in time,” the department wrote in a press release.

It adds that it discourages attempts to analyze data without the “appropriate application” of epidemiological methods. The DOH also expressed concerns over the data set only analyzing 33 out of Florida’s 67 school districts.

RELATED: Kids 5-11 may soon be able to get Pfizer’s COVID vaccine

Your team’s analysis doesn’t account for important factors beyond masks, such as testing frequency, community spread, etc. Did all these schools collect data in the same way, define cases in the same way, and mitigate spread the same way?

Ladapo, in the past, has shared that he is against lockdowns and that he believes the decision about whether to get vaccinated should be an individual one, with people making their own health care decisions.

But where do experts stand on the information released by Fried? We reached out to Dr. Jason Salemi, an associate professor of epidemiology at the University of South Florida and Dr. Jill Roberts an epidemiologist with USF Public Health for their thoughts.

“The covid dashboard that was used for the data is very limited in what information is present. You can indeed note that cases were higher in a particular area, but without further information, it is not possible to determine the cause,” Dr. Roberts wrote in an email to 10 Tampa Bay.

She adds that, ideally, a large difference in cases would have been noted during Fried’s team’s data collection and an independent analysis would have been called for to investigate the cause.

“There are a large number of epidemiologists tracking covid that may have been of great use here, and still could be,” she wrote.

Dr. Roberts also pointed to two recent analyses published by the CDC that determined mask-wearing in schools has “significantly decreased” COVID’s burden during the delta variant surge. You can find those here and here.

RELATED: The impacts of thousands of teacher vacancies across the state

I have so many questions. Like: who did this analysis? What is their training? What are their statistical methods for testing their observations?

The antidote to anti-science IS NOT a sloppy data dump with unclear methods & untested conclusions. JFC. https://t.co/X6Wsm7AsMc

As for Dr. Salemi, he says without a central repository of information related to school-based COVID cases, “it appears as though someone has only been able to abstract data from county-level dashboards that provide sufficiently granular data.”

He adds that concern should have been given to several factors including how each school district collects its data, the completeness of reporting, how the information makes it to a school district’s dashboard, and the differences in testing protocols.

“These points are not criticisms of the analysis, but they do need to understand and communicate how imperfect the data are in trying to investigate this issue,” he wrote.

Dr. Salemi also pointed out an issue he found on a cursory review of the FDACS spreadsheet.

“The ‘peak per cap’ numbers are incorrect for Dade and Broward by more than a factor of 10. There are no formulas within the spreadsheet, so it’s hard to tell how these errors were made,” he explained.

Regardless of the noted limitations of Fried’s office’s report, Dr. Salemi says the data abstracted would still show a higher percentage of infected students in counties that have parental opt-outs or no mask requirements compared to those with medical opt-outs only.

But that doesn’t mean the data used to determine that is perfect.

“These data are too flawed and have too many caveats to claim the indisputability of the findings. So, to me, scientific communication of the results and the limitations is absolutely critical and is one thing I certainly would have done differently, even if this particular analysis was more robust,” Dr. Salemi wrote.