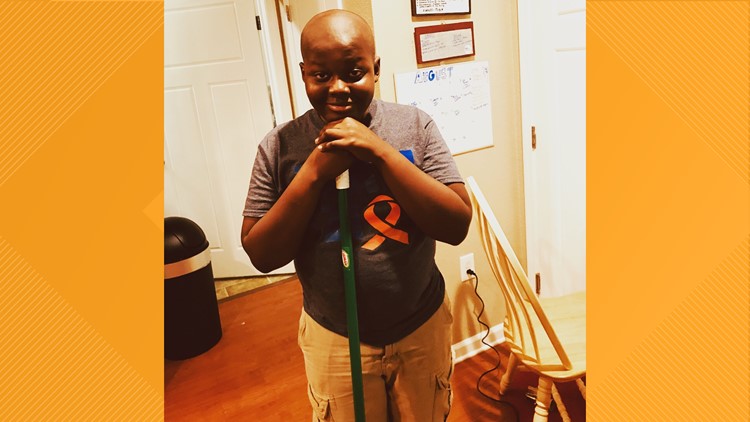 You might say that it’s only fitting Tzion plays for the Fighting Christians because not only are Tzion and his family a part of his fight against leukemia but the entire team is as well.

Then Courtney Caffee, Tzion’s mom, got devastating news about her son in 2018.

“That day, it was a nightmare. The doctor told us that he was high-risk, acute ALL [Acute Lymphoblastic Leukemia]. We thought we were going to lose him,” Courtney Caffee said.

He went into remission, but the cancer came back in 2020.

Tzion was in the hospital for 28 days on 24-hour dialysis.

“He couldn’t walk. He was in a wheelchair. He was on crutches, a walker. It just took everything away from him,” Courtney Caffee said.

Then Tzion found a match for a bone marrow transplant, his nine-year-old sister Cayleigh.

“They tease each other. Cayleigh is like, ‘Hey, I saved your life.’ He’s like, ‘Oh, you gave me bad cells,’ when he gets sick,” Courtney Caffee said.

A now 17-year-old Tzion is in remission and plays as both an offensive and defensive lineman at University Christian School.

“I lost a whole bunch of my strength and speed. I did get tired quickly, but then after I started doing it every single day, my speed is getting up. I don’t get as tired as I used to,” Tzion Caffee said.

Tzion has the support of the entire football team both on and off the field.

“It means a lot,” Tzion Caffee said. “They help me push myself to get better.”

“Just being able to know that I can reach out to someone like that and help them get through tough times like this is really important. I also think it’s good that he’s on the football team to form that brotherhood and the friendships he needs to keep going,” said Nathan Oxford, Tzion’s teammate.

“God gave him that strength to keep on moving,” Courtney Caffee said.

Tzion plans to pay it forward. He would like to play football in college and then become an oncologist.

Tzion Caffee is a lineman for University Christian School’s #football team. The 17 year old is in remission after battling #Leukemia for a second time.
See how the team is supporting him and & his fight to live today at 5:30 on @FCNsports @FCN2go #HeartoftheGame #teamsideline. pic.twitter.com/mRHlgyrQrD